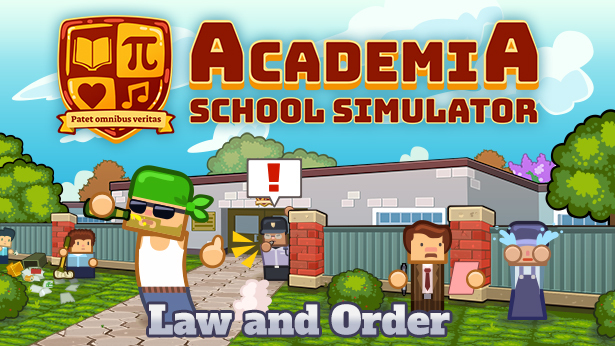 We’re excited to finally release our first themed update, which we are calling Law and Order!  This has been a long time coming, so let's get right to it!

You can now link certain zones to each other, to maximize efficiency! In much larger schools, there was a tendency for the students and staff to wander or get lost in school, leading to them not having enough time to eat or hang out and have fun in the common room.  With Zone Linking you can now specify which classrooms will go to specific cafeterias and common rooms, as well as principals’ offices (principals with an “s” you say? More on that later).  We’ve also added links from kitchen to cafeteria, so you can more efficiently control your kitchen staff.

In larger schools, students could sometimes take forever to walk to the principals office, losing them precious learning time.  And once they’re at the office there was a crowd of students waiting for the principal to scold them!

The lawyer uses the power of legalese to let you get away with...well not murder, but maybe some less ethical things.  Hire a lawyer so you can fire your employees at will (no more warnings!) and expel your students as you please.  In future updates when we have an events system, the lawyer will be much more interesting.

Gang Members have been spotted near your school!  As gang members go, these guys are actually pretty chill, they most want to influence your students to be more delinquent and to join their gang, and while they’re at it they’ll use your clean toilet facilities.  Chase them off by hiring and routing some monitors! Larger schools will attract more gang members, so make sure you’ve got all the exits covered!

Thanks to everyone who tried out the test and candidate builds and submitted bug reports.  As a little Easter Egg, there is a hint in the description about what the next update will be, can you figure it out? It’s something we mentioned more than once!